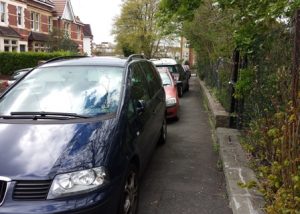 Neighbourhood activists interested in enhancing their local environment will know that one of the main issues is the litter and obstacles left around by our neighbours. In particular, efforts to enhance the walking environment are sabotaged by people who allow their hedges to overwhelm the street, park their cars on pavements and corners and permanently store their many and smelly recycling bins on the walkway. “What point”, we say to each other, “for the tax payer to resurface pavements, if many people still find them to be obstacle courses?”

For the last couple of months, representatives from Greater Bedminster Community Partnership have been meeting with officers from Bristol Waste Company and BCC to see if we can improve the situation.

Our strategy is based upon two assumptions:
1. NPs and other neighbourhood based organisations are well placed to encourage better behaviour from neighbours by reminding them that thoughtless obstructions can be particularly harmful for older people, those with sight and mobility difficulties and for people with small children. Local groups can take practical steps such as turning flytipping sites into community gardens and adding art work. Most people are open to this sort of persuasion, once their attention is drawn to it.
2. Only official bodies can alter their regimes to accommodate, for example, residents who have genuine difficulties in storing their recycling bins. Also, only official bodies can enforce regulations against the tiny minority who don’t give a damn. BCC is trialling new measures on selected streets in GBCP, but we don’t know the results yet.

We’ll circulate information when we have it. Meanwhile, it would be useful to know how other Neighbourhood Partnerships are approaching this issue, if at all.

Note: this post first appeared in a NP Together email group, which brings together neighbourhood activists across Bristol. If you want to join the group, email .

Hope @Chris_Boardman will be able to address the issue of pavement parking. Bristol Walking Alliance & many others across the country ... are asking for a London-style pavement parking ban.
@livingstreets @RNIB @Sustrans @Walk21Network @guidedogs @CommonsTrans
https://t.co/SROuTgey2Z

Good to see this from @WestofEnglandCA Overview & Scrutiny Committee: The walking network also needs to be linked in & aligned with ... the High Streets work & Liveable Neighbourhoods work, so that we encourage walking to the local high street as the norm.
https://t.co/ZBFJslxiQW p10

📢 We are looking for new Trustees!

🗳️ If you have passion, fresh ideas and a desire to improve our streets - we want to hear from ... you!